This remarkable biography unveils the inspiring story of a trailblazing woman in revolutionary France, Marguerite Lalanne, who revolutionized the circus world by waltzing and pirouetting across tightropes above countless adoring fans, including Emperor Napoleon Bonaparte--without ever missing a step.

This early reader photo-biography about soccer superstar Megan Rapinoe describes her childhood, when she started playing soccer, and how she got to be a world-renowned player.

The World Is Not a Rectangle: A Portrait of Architect Zaha Hadid by Jeanette Winter

Famed architect Zaha Hadid grew up in Baghdad, Iraq, and dreamed of designing her own cities. But as a Muslim woman, she faced many obstacles. Determined to succeed, she worked hard for many years, and achieved her goals—and now you can see the buildings Hadid has designed all over the world.

Friendship to the max! At Miss Quinzella Thiskwin Penniquiqul Thistle Crumpet's camp for hardcore lady-types, things are not what they seem. Three-eyed foxes. Secret caves. Anagrams. Luckily, Jo, April, Mal, Molly and Ripley are five rad, butt-kicking best pals determined to have an awesome summer together-- and they're not gonna let a magical quest or an array of supernatural critters get in their way!

Wolverine, Deadpool, Doctor Doom, Thanos: There's one hero that's beaten them all-and now she's got her own ongoing series! (Not that she's bragging.) This adventurous series stars Squirrel Girl, the nuttiest and most upbeat superhero in the world!

Nadia has spent her entire life as a captive of the Red Room, but now this teenage super scientist is spreading her wings! Hank Pym's daughter has a lot of time to make up for, and she's determined to change the world. With Jarvis at her side, she's on a mission to bring together the brightest girl geniuses of the Marvel Universe - starting with Lunella Lafayette, the miraculous Moon Girl to save the day! 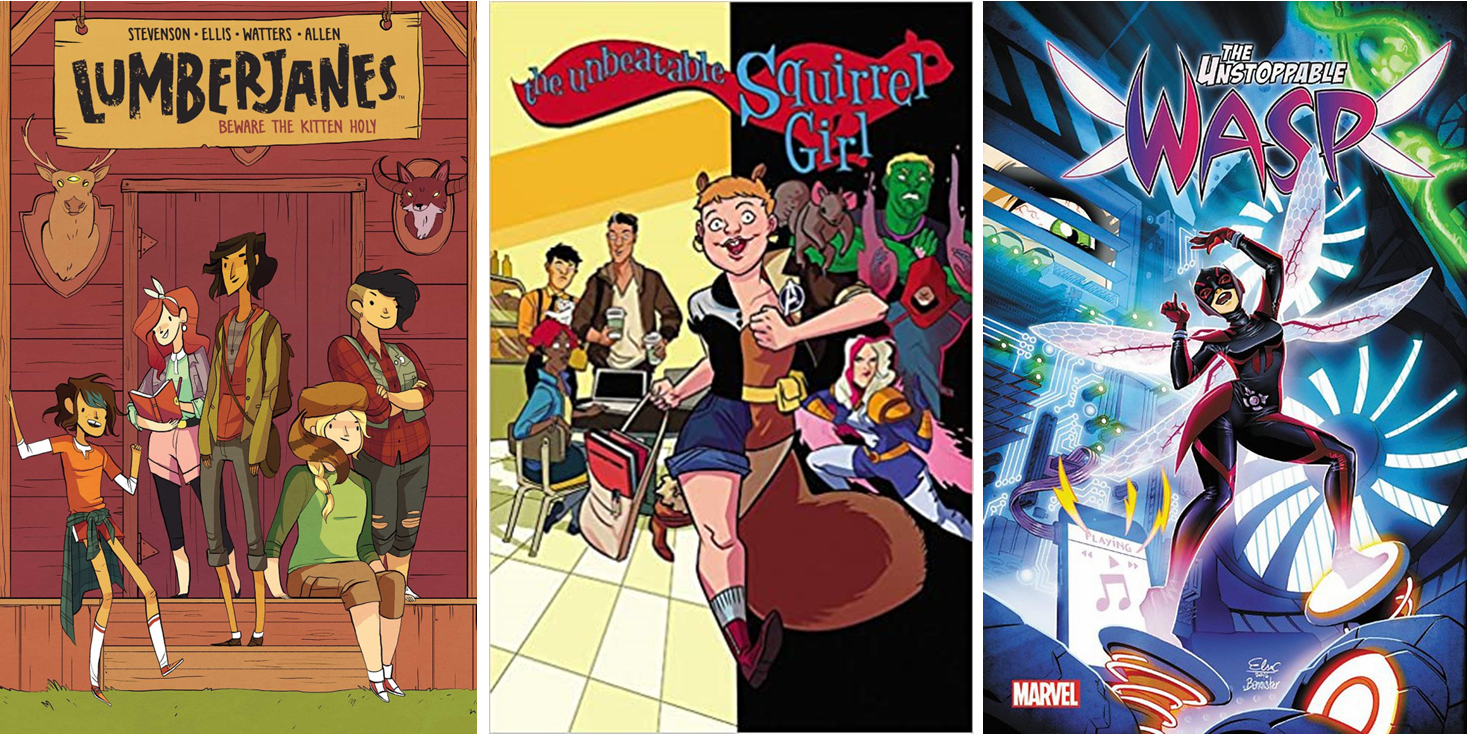 Moxie: A Novel by Jennifer Mathieu

Vivian Carter is fed up. Fed up with her small-town Texas high school that thinks the football team can do no wrong. Fed up with sexist dress codes and hallway harassment. But most of all, Viv Carter is fed up with always following the rules. She takes a page from her mother’s past as a punk rock Riot Grrrl in the ’90s and creates a feminist zine that she distributes anonymously to her classmates. Pretty soon Viv is forging friendships with other young women across the divides of cliques and popularity rankings, and she realizes that what she has started is nothing short of a girl revolution.

Xiomara Batista feels unheard and unable to hide in her Harlem neighborhood, but she has plenty she wants to say. Frustrated with her mother’s religion and her own place in her community, she pours all her frustration and passion onto the pages of a leather notebook, reciting the words to herself like prayers. When she is invited to join her school’s slam poetry club, she doesn’t know how she could ever attend without her mami finding out, much less speak her words out loud. But still, she can’t stop thinking about performing her poems. Because in the face of a world that may not want to hear her, Xiomara refuses to be silent.

Born into a family of powerful witchdoctors, Arrah yearns for magic of her own. But each year she fails to call forth her ancestral powers, to her growing despair. When she discovers that the long-imprisoned Demon King is stirring, she must make a difficult choice: should she trade years of her own life for scraps of magic or rely on the magic of those around her to save the world instead?

When the Taliban took control of her village in Pakistan, she spoke out! At age fifteen Malala Yousafzai fourght for her right to an education. She was shot in the head at point blank range and was not expected to survive. She did survive and made a miraculous recovery. Malala will make you believe in the power of one person's voice to inspire change in the world.

This autobiography introduces Caroline Johnson, a F-18 Weapons Systems Officer (WSO) in the US Navy. During her deployment aboard the aircraft carrier USS Bush, she flew missions in Afghanistan, Iraq, and Syria. She was the first woman to fly in combat in Iraq since 2011 and was the first woman to drop bombs on ISIS.

Harriet Tubman: The Road to Freedom by Catherine Clinton

Every schoolchild knows of Harriet Tubman's heroic escape and resistance to slavery. But few readers are aware that Tubman went on to be a scout, a spy, and a nurse for the Union Army, because there has never before been a serious biography for an adult audience of this important woman. (You may also enjoy the movie Harriet)

Helle Keller tells a remarkable account of overcoming the debilitating challenges of being both deaf and blind, has become an international classic, making Helen Keller one of the most well- known, inspirational figures in history.

The story of the HeLa Cancer cells, and the woman who "donated" them. After the doctors took her cells without asking, they continued to multiply and became part of a medical revolution and a multimilion dollar industry. (You may also enjoy the movie)

The Library is closed in observance of Independence Day on Monday, July 4th.

You can also continue to enjoy our entire Digital Storytime catalog, anytime! While visiting our website, click on the "Storytime" button.

Join us at the Library for coffee & conversations with friends new & old.

Continues weekly, Wednesdays at 9:00 AM

and stay for Chair Yoga at 10 AM

What is chair yoga? Chair yoga is a beneficial form of yoga for any fitness level, from active seniors to those recovering from an injury. Chair yoga has the following benefits for older adults: low impact on joints, improves flexibility, and stress reduction.

Join us on Wednesday, July 6 at 6:30 PM to discuss the book of the month, Knit One, Kill Two by Maggie Sefton.

Bring your works in progress to work your knitting while you enjoy friendly conversations.

Grab new weekly activity bags every Thursday at the Library through July 28th as supplies last. No registration necessary.

Bring your A-Game to compete for tournament prizes, or just come for fun, and enjoy some Lawn Games!

Learn about why our multi-legged friends are important for the environment and touch beetles, walking sticks, and more with the ISU Insect Museum! (Note: program will be outside)

We're teaming up with Solon Recreation to bring you a funfilled evening of yard games, refreshments, and movies!

Then at 8:30 PM (approximately - dusk) we'll start the outdoor movie!

Bring lawn chairs, or blankets to get cozy for the movie.