These traditional narratives and graphic memoirs are nonfictional accounts of real events written from personal perpsective. Some of these memoirs include important historical events, while others share the day-to-day lived experiences of the author.

I am Jazz by Jessica Herthel   (eBook)

"Jazz is a sensitive and courageous young woman. Her story is inspiring and important to read. By sharing her experiences and view she has added to our understanding and compassion for the transgender experience." Barbara Walters

At first, Trisha loves school, but her difficulty learning to read makes her feel dumb, until, in the fifth grade, a new teacher helps her understand and overcome her problem.

Testing the Ice: A True Story About Jackie Robinson by Sharon Robinson

Sharon Robinson, the daughter of baseball legend Jackie Robinson, has crafted a hearwarming, true story about growing up with her father.

The Diary of a Young Girl by Anne Frank    (eBook)   (eAudiobook)

Anne Frank's The Diary of a Young Girl is among the most enduring documents of the twentieth century. Since its publication in 1947, it has been a beloved and deeply admired monument to the indestructible nature of the human spirit, read by millions of people and translated into more than fifty-five languages.

Raina wakes up one night with a terrible upset stomach. Her mom has one, too, so it's probably just a bug. Raina eventually returns to school, where she's dealing with the usual highs and lows: friends, not-friends, and classmates who think the school year is just one long gross-out session. It soon becomes clear that Raina's tummy trouble isn't going away... and it coincides with her worries about food, school, and changing friendships. What's going on?

The author recounts in graphic novel format her experiences with hearing loss at a young age, including using a bulky hearing aid, learning how to lip read, and determining her "superpower." 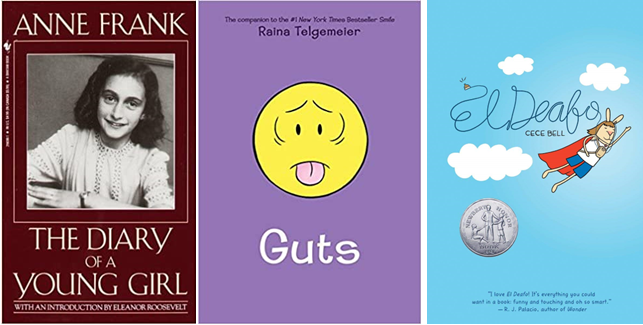 Originally published to wide critical acclaim in France, where it elicited comparisons to Art Spiegelman's Maus, Persepolis is Marjane Satrapi's wise, funny, and heartbreaking memoir of growing up in Iran during the Islamic Revolution.

"An illustrated comic travelogue about an American immigrant driving alone through all that's left of "The Mother Road," Route 66"

They Called Us Enemy by George Takei     (eBook)

Actor, author, and activist George Takei recounts his childhood imprisoned within American concentration camps for Japanese Americans during World War II and the impact the experience had on his later life.

A Different Kind of Daughter by Maria Toorpakai     (eBook)

A Different Kind of Daughter tells of Maria's harrowing journey to play the sport she knew was her destiny, first living as a boy and roaming the violent back alleys of the frontier city of Peshawar, rising to become the number one female squash player in Pakistan.

The Good SHUFU: Finding love, self, and home on the far side of the world by Tracy Slater

In this memoir of travel and love, a fiercely independent American woman finds everything she ever wanted in the most unexpected place. Shufu. In Japanese it means "housewife," and it's the last thing Tracy Slater ever thought she'd call herself. A writer and academic, Tracy had carefully constructed a life she loved in her beloved hometown of Boston. But everything was upended when she fell head over heels for the most unlikely mate: a Japanese salaryman based in Osaka who barely spoke her language. Deciding to give fate a chance, Tracy built a life in Japan filled with contradictions and dissonance, but also strange moments of enlightenment and joy.

Measure a Man: from Auschwitz Survivor to Presidents' Tailor by Martin Greenfield

He's been called 'America's greatest living tailor' and 'the most interesting man in the world.' Taken from his Czechoslovakian home at age fifteen and transported to the Nazi concentration camp at Auschwitz with his family, He learned how to sew; and when he began wearing the shirt under his prisoner uniform. Now 86 years old and working with his sons, Greenfield has dressed the famous and powerful of D.C. and Hollywood, including Presidents Dwight Eisenhower, Bill Clinton, and Barack Obama, celebrities Paul Newman, Leonardo DiCaprio, and Jimmy Fallon, and the stars of Martin Scorsese's films. Written with soul-baring honesty and, at times, a wry sense of humor, Measure of a Man is a memoir unlike any other-one that will inspire hope and renew faith in the resilience of man.

Blue-Eyed Boy is a gripping, occasionally comic account of what it took for an ambitious man, aware of his frightful appearance but hungry for meaning and accomplishment, to master a new craft amid the pitying stares and shocked reactions of many he encountered on a daily basis.

He Named Me Malala

Profiles the life of young Pakistani student Malala Yousafzai who advocated for women's rights and education in the Taliban-controlled Swat Valley, survived an assassination attempt, and became the youngest nominee for the Nobel Peace Prize.

Won't You Be My Neighbor?

As one of America's most beloved children's show hosts, Mr. Rogers remains one of the most iconic television figures for families worldwide. This documentary takes a closer look at the person behind the show, persona, and personality that helped define what it meant to be a good person and be a part of a healthy community. Through his children's show, Mr. Rogers would go on to inspire a generation by not skirting real world issues, confronting issues of social justice and maturity through a lens that provided an educational aspect that was approachable by kids and appreciated by the entire family.

Into the Wild (Coming Soon!)

The dramatic retelling of Christopher McCandless life as he was a fresh college graduate with a promising future ahead. And he gave it all up and walked out of his priviledged life and into the wild.

Your household can visit the library for 20 minutes to browse for materials (no limits on quantity!) or use a computer. Monday through Friday appointments between 10AM - Noon are reserved for high-risk individuals or households.

Book your visit today! Don't forget to mask up!

Place materials on hold (by 5PM Wednesday) to pick-up at Curbside on Thursday between 1:30-6PM.

Materials not picked up after two curbside days will be checked-in and made available for other patrons.

K-12th graders are invited to stop by the Library each week to snag a fun, at-home activity kit! New BAM POW Grab & Go activities for k-4th graders and CATS to Go bags for 5th-12th graders are out in front of the Library every Thursday. Teens are also invited to optional Zoom hang outs at 4 pm on select Thursdays to create along with other Solon teens, or just log on for a virtual hang out.

Kits are available outside the Library every curbside pick up day (Tuesday, Thursday, and Saturday) as long as supplies last, with new kits added every Thursday. We ask that each participant just take one kit, so that there are enough for all who would like to participate.

Trivia Night is going Virtual! Play from the comfort of your own home, live through Zoom! Come test your knowledge! Play as individuals or teams. No limit to number of team members. You must register your team to receive the zoom meeting code and digital answer sheet. Teams must organize team chat through a secondary method (SMS, Facebook. Google Hangout, etc.) No answers in the Zoom chat! To register your team send an email to akurth@solon.lib.ia.us

Prizes will be awarded!
High-Risk Appointments

Your household can visit the library for 20 minutes to browse for materials (no limits on quantity!) or use a computer. Monday through Friday appointments between 10AM - Noon are reserved for high-risk individuals or households.

Book your visit today! Don't forget to mask up!

Your household can visit the library for 20 minutes to browse for materials (no limits on quantity!) or use a computer. Book your visit today! Don't forget to mask up!

Fall Baby Time
Join us Saturday mornings at 10 am for Baby Time Zoom! We'll get to see each other's faces, sing some songs, and virtually socialize. Songs and activities are designed for caregivers and little ones birth to 24 months, but older sibling are always welcome. Program will run for 6 weeks, starting Saturday, October 17th through Saturday, November 21st.

Place materials on hold (by 5PM Friday) to pick-up at Curbside on Saturday between 1:30-5PM.

Materials not picked up after two curbside days will be checked-in and made available for other patrons.

Put on your costumes and head to the Trunk or Treat event at Solon Recreation and Nature Center, from 5-6:30PM on 10/24. We'll see you there!